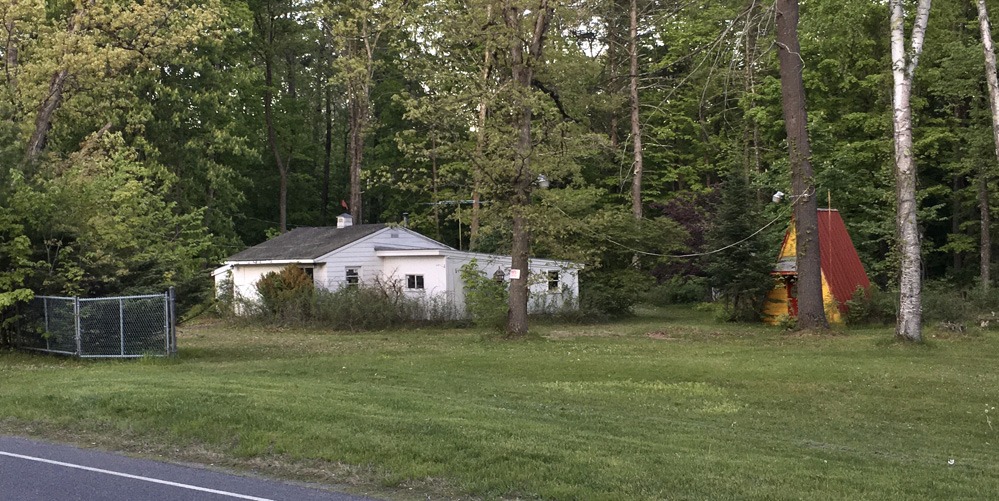 When Richard VanDusen Jr. established his nursery and garden supply business on West Mountain Rd. in 1963, it is highly unlikely he would have considered it as a roadside attraction.  Yet, I cannot help but think that it would be quite comfortable in that niche.  Roadside attractions are meant to draw attention and are recognized for their quirky and whimsical characteristics.  So, how does 88 Acres qualify?  A passerby would have noticed the funny little A-frame structure, the cheerful wooden signs in the shape of birds, and advertisements for “Charlie” Chickadee out front.  Once you pulled in there was more.  Around back there were trails that held a surprise.  They were inhabited by African wildlife, and they offered an opportunity to step away from the ordinary.

Richard VanDusen Jr., or “Dick” as he liked to be called, grew up in Glens Falls.  The natural world held a fascination for him even as a child.  From raising baby chicks in the basement of his Monument Avenue home to catching turtles at Crandall Pond, he developed an appreciation for the plants and animals he encountered.  He also developed a love for drawing and painting, enabling him to capture on paper or canvas the things he could only briefly hold onto in the field.

It seems that Dick’s early plans were to pursue a career in landscape architecture.  After graduating from Glens Falls High School, he went to SUNY Agricultural and Technological Institute and SUNY Delhi.  He then served in the US Navy and worked for Exxon Mobil Corporation.  Over the years, VanDusen traveled frequently to Kenya and Tanzania, visiting game preserves, and even writing a book called “Safari Furahi”.  Those trips stoked a passion for the exotic landscapes and animals of the African continent.

After his father became ill, VanDusen settled at the Hunting Hill family homestead on West Mountain Rd.  He opened 88 Acres on property across the road from the 19th century farmhouse and barn.  The garden shop was small and the exterior quite plain.  Inside however, certain details immediately grasped your attention.  There, hanging on the walls of one room were numerous trophy horns from African game hunts: kudo, eland, bushbok, springbok, impala, and wildebeest.  In another room, the air smelled of birdseed, the many varieties of which filled open wooden crates. An assortment of handmade and manufactured bird houses hung from the walls and ceiling, while interspersed throughout were original paintings of animals.  Without a doubt, it seemed that Dick’s African adventures had tapped into a deep source of excitement and longing.

It seems only natural that Dick would desire to recreate those experiences here, a daily reminder of what brought him happiness.  Almost like an extension of his travels, Dick cleared a system of trails in the woods just behind the business.  He populated those trails with a cast of life-size animal sculptures as well as hand-painted signage which declared what to expect on each path and what to be on the lookout for.  A sound system was installed to give an audio effect of jungle noises.  Turn down one trail and you may encounter a zebra or an elephant.  On another path, there may be a giraffe or a rhino.   If you’ve ever walked through Jungle Land at Storytown or visited Adventureland at Disney World, the 88 Acres version was merely a smaller and more simplified version of both.

In addition to the jungle trails, Dick created an adorable sidekick known as Charlie Chickadee to represent the business.  “Charlie” was made of painted, cut-out wood board and was displayed like a mascot.  A little A-frame shed was built to provide extra retail/storage space but also served as Charlie’s home.  Cartoon advertisements of Charlie Chickadee appeared in the Post Star promoting new stock and seasonal specials.  I guess you could say that he was “tweeting” before tweeting became a thing.

After 48 years of representing 88 Acres, Charlie Chickadee and his other feathered friends officially moved to a new home in 2011.  The contents of the business were sold to another local nursery, Northland Gardens, prior to Dick’s death in 2012.  Today, Northland Gardens still offers some of the excess stock from 88 Acres, including hard to find birdfeeders. The friendly, wooden birds may now be spotted amongst the bushes and trees at that address.

Early last year, I happened to drive down West Mountain Rd and passed by the property.  I had spent several years of my youth living on a nearby road and I remembered exploring the woods behind my home and stumbling upon the trails at 88 Acres.  For us neighborhood kids, the lure of the sounds of an elephant trumpeting or a lion roar was irresistible.  It begged investigation.  We would frequently return to these strange trails, letting our minds and bodies wander and having adventures of our own.  As an adult, there was a part of me that wondered if I had imagined it all, but the figure of a giraffe peeking out from behind a house confirmed my memory was real.  I felt compelled to follow those trails to the end of their story.

The safari paths themselves are now largely overgrown and have returned to a wilder state.  Charlie Chickadee and some fellow birds are now residing at Northland Gardens.  The life-size animals that once stood hidden in bushes and behind trees have been sold and scattered.  One exception is the giraffe, which during summer months, you may catch a glimpse of on a nearby private property a couple doors down from the VanDusen farmhouse.  And Charlie’s A-frame abode still sits on the former 88 Acres lot site.

Should you be interested in taking a look, please remember that what remains is either on private property or at a business location.  Always be respectful of the owners and ask permission before walking around.

Special thanks to Ivy McQuade, David Goodall, and Tracy Tabor.