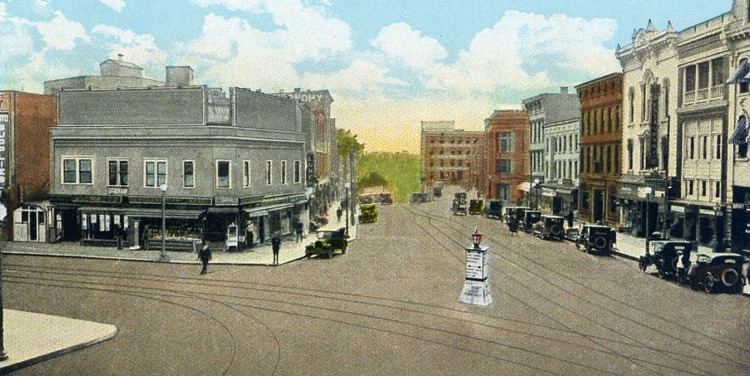 The Glens Falls Bank opened in 1851, making it the first bank in Warren County. In 1864, the fire that destroyed 112 buildings in Glens Falls also destroyed the bank. They rebuilt following the fire and re-opened as the Glens Falls National Bank in 1867. Only a few years later, this bank would be home to a crime that rocked the town and remains unsolved to this day.

On the evening of January 5th, 1870, a stranger hired a horse and a cutter (or sleigh) from an unsuspecting gentleman in Saratoga. The stranger offered to pay double the price of his standard rate, and while the gentleman found it suspicious, the money was good and he agreed.

It was cold in the early hours of January 6th, 1870, back when present day Centennial Circle was still known as “The Corners.” A group of burglars made their way by horse and sleigh to Glens Falls and quietly broke into the old brownstone of Glens Falls National Bank. Before entering, they soaked horse blankets in a water trough behind the building.  They then put the blankets over the doors and windows to prevent anyone from hearing what was going on inside.

The group of thieves used dynamite to blow open the safe – this went undetected by outsiders because of the wet blankets. They gathered their loot and made their escape, taking mostly greenbacks of large denomination, which totaled approximately $20,000. (This would have been about $422,000 today. Greenbacks were emergency paper currency used during the Civil War. Issued by the United States government, they were printed with green ink on the back – thus their name.)

When workers reported the next day and discovered that a robbery had taken place, bank officers held an emergency board meeting. They determined that a reward of $7,500 would be paid for the recovery of the money and bonds that had been stolen. The hope was that this would also lead to the apprehension and conviction of the criminals.

The bank wasted no time ensuring that a robbery like this could not take place again. The Post-Star issue from September 17, 1953 detailed that every night, a horse-drawn lunch wagon would pull up in front of bank and open for business for the night. The wagon remained there until dawn the following day, and the proprietor served as a night watchman for the bank.

First National Bank, being very close in proximity to the robbery, also held a board meeting after the raid. They offered any assistance to the Glens Falls National Bank that they could. Also, fearing for their own vulnerability, First National Bank purchased beds and bedding for their teller and clerk to sleep in the bank, while the cashier was instructed to “procure a watchdog.” Yes, the teller and clerk received pay raises for these newfound responsibilities; they now annually made $1,200 and $500 respectively. The added security was effective, and no other burglaries were reported in downtown banks.

The 1953 Post-Star article also discussed a previous article written in the Warren County Times from July 22, 1870. It stated two men had been arrested in Connecticut for their connection to the burglary. Several thousand dollars’ worth of missing bonds that had been taken from the Glens Falls National Bank vault were found in the possession of George Marshall and John Kendall. While this solves a small piece of the mystery, the reward for more information has never been claimed, and the remaining bonds and Greenbacks were never recovered. The full mystery of what happened on that cold January night, remains unsolved.