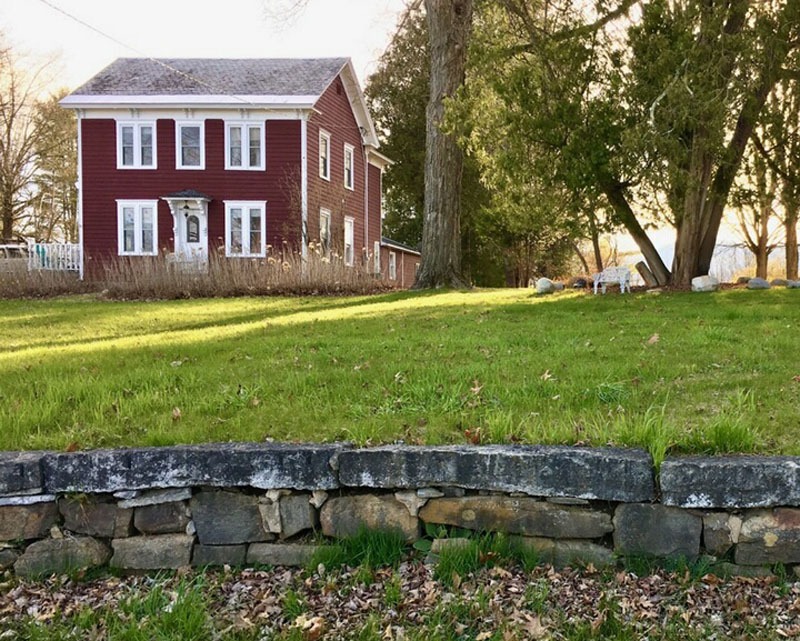 Our last blog covered the remarkable story of 19th century stone builder and preacher, Reverend George Brown.  But what about the many stone walls around the area whose builders remain anonymous and whose histories are unknown?  Is it possible to learn anything about those walls, or from them?  The answer is “yes”.  Though we may not be able to discern a specific story, we can look for a number of characteristics that may provide information about the history of the land itself, such as how natural events shaped the earth beneath our feet and how people have altered the landscape to suit their needs.  With facts and a bit of imagination, stone walls can transport the onlooker from a century or two ago all the way back to ancient times.

The poet Robert Frost, often wrote eloquently of the stone walls he was so familiar with.  They’re an iconic reminder of our colonial and 19th century heritage.  The northeastern region of the country, New England and New York in particular, possess a large percentage of the stone walls in the United States.  In fact, sources have estimated that between 240,000 – 250,000 miles of stone walls are contained within these states.  The reason for that dates back 30-40,000 years ago to the last Ice Age, when large glaciers covered the land.  The Laurentide Ice Sheet spread in a southeastern direction from central Canada to the East Coast and covered where we now live.  When it retreated, melting ice dropped particulates that had been suspended, leaving a massive debris field of stones and boulders behind.    As people settled, woods were cleared and the land was divided into fields for crops and pastures.  The majority of walls were built between 1810-1840 when individual land ownership increased and the predominate occupation was farming.  Walls became a marker of our once agrarian lifestyle.

There’s an old New England joke that goes something along the lines of “What’s the most successful crop you have each year?”  The punchline – “stones.”  Okay, maybe I can’t quite remember how it goes exactly, but I’m sure you get the gist of it.  So why are there all these stones around and what does it have to do with local history?

We know that rocks of all shapes and sizes were deposited as the glaciers receded during the last Ice Age; but before they were left, many were crushed and tumbled by the sheer pressure of the ice resulting in smaller, rounded stones. Not only that, but from these were produced an even finer material that acted as a sort of lubrication between ice and bedrock.  This material is known as lodgment-till.  Stones that were deposited later and did not receive the grinding were left as larger and more angular stones known as ablation-till.  It turns out that this is important to would-be farmers because the lodgment-till forms a hard, almost impermeable layer beneath the surface that keeps moisture within the soil.  This in turn, makes for favorable land for cultivating crops.

So, we have good land for farming but it is riddled with stones, both laying out in the open and hidden beneath.  In order to capitalize on this prime real estate, farmers had to remove the obstacles.  This was a laborious and time-consuming process.  Stones would be moved either by hand or with the assistance of oxen and cart.  Ultimately, what was done with the stones depended on what intentions the farmer had for the land and how much effort he wished to expend.  Sometimes, they were moved a minimal distance and simply discarded along the periphery of the property.  Other times however, landowners took into consideration that as the land was deforested for crops and livestock, wood became a commodity.  From their practical viewpoint, stones could be used to build fencing rather than wasting valuable wood.

This brings us to one of the first questions to try to answer when encountering a stone wall.  What kind of a wall is it?

A “dumped” or “tossed” wall is one where the stones were just dumped randomly along the edges of the property as the farmer cleared the land.  There is no real order to them except that they are linear in form, not providing any true physical barrier but more of a visual indication of territory.  As I walked around the VanDusen Preserve in Queensbury, formerly the VanDusen homestead, the walls that I encountered (above left) along the trails seem to be of this type.

Most walls I have come across in this immediate area fall into the category of a “double-stacked” wall.  What makes them double-stacked is their construction.  There are two distinct vertical sides with a layer of small stones sandwiched in between, much like an Oreo cookie.  When you look at these walls, you will notice that larger stones are placed at the bottom for stability with medium size stones used as the wall increases in height.  The center, or Oreo frosting, is filled as tightly as possible with smaller rocks.  In addition, the joints are staggered and larger stones are placed that connect both outer layers.   The two outside layers (the cookie layers) also gradually angle towards the center.  Laying stones in this manner creates equally opposing points of pressure that work with gravity to give the structure integrity.  Examples of this type of wall can be found along Ridge Rd. and Chestnut Ridge Rd.  Without doubt, these walls were purposefully constructed as boundaries, functional fences, or architectural ornamentation.

North of the intersection with Route 149, on Ridge Rd., is the 1870’s farm of George Washington Brayton.  It’s easily identified by the stately house on the hill with the mansard roof and the red barn with the initials G. W. B. crafted in the slate roof.  In front of his tenant house (see top) is a simple but elegant “single-stack” wall.  It consists of one layer of fairly regular shaped and sized stones, capped with long slabs.  This low wall was designed as a decorative statement.  Just on either side of this, the wall becomes a well-made, double-stacked wall.  Its design may have been more functional due to its height and mass.  The average height of a wall was 3-4’ as that was about the height at which a man could typically lift a stone.  The height of a wall could be raised with the addition of wooden fencing erected atop the stonework.

Yet another wall, called a “disposal” or “rubble” wall, is located on the east side of Ridge Rd. just north of the sharp turn.  It resembles a “double-stacked” wall but is lower in height and as wide if not wider at the base.  This wall extends between the stone house and the barn.

Located opposite the “rubble” wall on the west side of Ridge Rd. (along the property that is now the Country Inn Bed and Breakfast) a wall was built mostly of very large, boulder-like stones.  This may suggest that its construction is older because the larger materials would have been cleared first.

Another indication of its age may be the large crusts of lichen found on many of its surfaces.  Lichens are known to grow at the rate of approximately .04” per year.  This method of dating a wall does have drawbacks since older stones with lichen growing on it could be picked up from one place and used in a wall somewhere else for affect.  I happen to think it’s the former though given the way one of the trees has grown over a wayward stone, actually holding it firm and creating a terrific anthropomorphic silhouette of a face.

Some existing walls may have served as a means of keeping livestock in or out of various areas or properties.  The 1876 census of Queensbury lists a large population of sheep as well as cows, pigs, and horses.  I haven’t been able to confirm anything but thought it worth mentioning.

A couple of other things should also be noted regarding the walls mentioned here: they are all “dry” walls, meaning that no mortar has been used; and no “quarried” stone was used.  Though there were quarries in the area, stones from them would be much more regularly shaped with possible tool markings or smoothly sawn faces evident.  With the exception of the capstone slabs in front of the George Brayton house, neither mortar use nor quarried material has been found within local walls.

As you drive throughout Queensbury, Lake George, Kingsbury, etc., be observant of these landmarks.  You may be rewarded by coming across one when you least expect it.  As you walk through the woods and stumble upon the telltale stacks, remember that the land you are walking on was likely an open field a hundred or more years ago, long since abandoned by people and reclaimed by nature.  The walls that were built soundly, with care and attention, will still be standing.  Like modern day fossils, they are the skeletons of past lives and past histories.