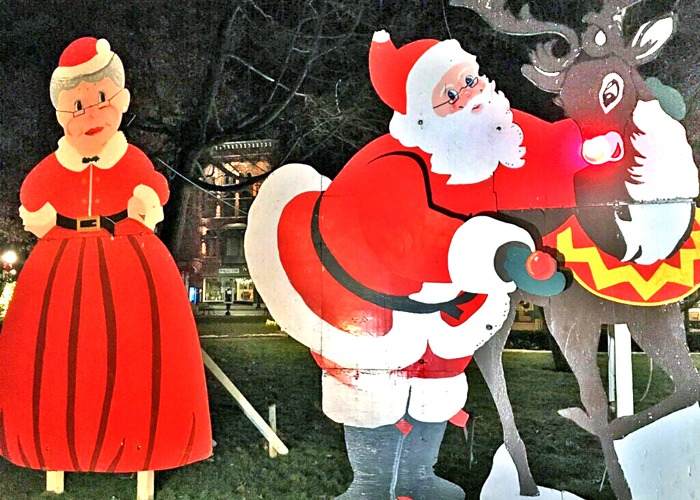 One of my favorite activities of the Christmas season is driving around the area and gazing in wonder at the holiday decorations and colorful displays.  I’m inspired by how ordinary facades and front yards are magically transformed into theatrical stages, the temporary settings for someone’s imaginative and light festooned play.

Porch railings dazzle with white and silver star-like sparkles.  Trees are draped in warm, bold colors that pull you in with their magnetic glow.  And while unconcerned representations of Santa calmly hold vigil on the lawn, we all know that the real Santa is frantically trying to complete his tasks before a December 24th deadline.  The same goes for Rudolf and company and even Frosty the Snowman.  Each Christmas is more impressive than the last as the cast of characters grows.

One display that I return to year after year, and never fails to put me in the holiday spirit, is the one in Hudson Falls City Park.  It’s an eclectic assortment of vintage oversized ornaments, a traditional manger scene, a walk-around wooden sign homage to the Twelve Days of Christmas, and more.  My favorite sight, however, are the larger-than-life wooden cut-outs of Mr. and Mrs. Claus.  Together, they greet cars and passengers driving up the hill from Glens Falls, their animated parts motioning in merry unison.

I often wonder about the people behind these displays.  Who had crafted the jolly, old elf and his bespeckled wife?  They reminded me of work I had seen and heard about before.  If you talk to anyone who grew up in Glens Falls in the 1940s-50s and ask what they remember about Christmas, they are likely to tell you about Max Tupper.  As I dug through old sources that spoke of Mr. Tupper, what I found was a heartwarming tale of a man whose boundless creativity matched only his love and devotion to his daughter.

In 1941, Max Tupper opened a sign shop on the South St. side of the Crandall Block.  There, he painted signs for stores and businesses, as well as promotional materials for the movie theaters.  With a mind for mechanics, he developed the skills that allowed him to incorporate movement into his work.  This winning combination of engineering and art was his unique calling card in the trade.

As the United States entered the Second World War that year, the citizens of Glens Falls expressed their resilience and hope for a brighter future through Christmas displays all over the city.  On the front steps of his modest home at 123 Sanford St., Tupper constructed an assemblage of animated Disney characters to add to the communal celebration.  Soon, the delightful displays would be a cherished memory, as he left to serve his country.

In 1944, Sgt. Tupper received word of an emergency at home.  He quickly returned to Glens Falls to find his newborn daughter, named Sandra Kay, in critical but stable condition in an oxygen tank.  After a trip to the Children’s Hospital in Boston, MA, it was confirmed that Sandra had cerebral palsy, a condition relatively unknown at that time.

Two years after coming home to be with his wife and daughter, the holiday tradition of outdoor Christmas decorations was still alive and well in Glens Falls.  This time, Max introduced a miniature theatre scene called “Tupper’s Tiny Theatre”.  Over 30 Disney characters, including Mickey and Minnie and the Seven Dwarfs, dutifully assumed their roles. Max cleverly designed a system whereby an electric motor powered a hidden arrangement of gears, pulleys, belts and levers.  This allowed for the figures to march and dance and a sequence of four different animated scenes to rotate every five minutes or so.  Even a musical element was added.  A wired record player gave the impression that joyful tunes emanated from the orchestra pit of the theatre.  The whole thing measured an incredible six and a half feet across and six feet high with numerous lights illuminating it.  Hundreds came to see it each night, so many that a police officer was called to direct traffic.  But the person who Max wanted most to impress, was the little girl who watched from the window, his daughter Sandra.  The display was dedicated to her and all the children who battled the same illness.

The following year, another animated display featuring Mother Goose joined the cast, as was a donation box for the Glens Falls Area Cerebral Palsy Association.  Max used this opportunity to raise awareness and funds for cerebral palsy, a cause he championed his whole life.  In December of 1949, between 800-1000 visitors came to see the display, many of them leaving generous donations.  The largest attendance recorded was the Christmas of 1950, with over 12,000 guests and $1,015.85 raised.

Max continued adding to the display each season until 1954.  The Claus’ made their debut in November of 1952.

From 1960 to 1968, Tupper did not post the holiday display due to illness in the family and the associated rapidly increasing costs.  He resumed briefly in 1968, until the deaths of both his beloved wife and daughter the following year.

Over the years, Tupper also did work for local theme parks such as Storytown, Gaslight Village, and Santa’s Workshop in Wilmington, NY.  He maintained his sign business and later in life, opened the Early American Museum on his West Fort Ann property.  Max passed away in 2007 at the age of 92.

The decorations and trimmings of Christmas are reminders of what the spirit of the season is all about.  It is a timeless tradition that puts a little hope and inspiration back into the world. For Max Tupper, I’m sure he’s smiling somewhere knowing that his message remains a bright and welcomed part of our holiday.

“Happiness adds and multiplies as we divide it with others.” – Max Tupper