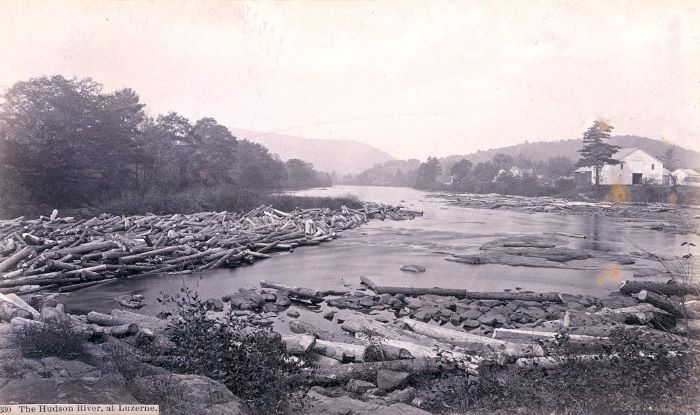 When Abraham Wing first settled in Queensbury in 1762, he built the first saw mill of many that would soon dot the landscape from Queensbury to the Adirondacks.  Early settlers were eager to capitalize on the power generated by the forty-foot drop in the Hudson River, just downstream from the vast wilderness of Adirondack timber.

By 1813, lumbermen transitioned from using horse and wagons to transport logs to utilizing the Hudson River’s current to float logs down river to mill sites.  This new highway proved to be so successful that logs from many entities began to crowd the waterway.  To prevent theft, New York State enacted a law requiring logs to be identified with the owners unique branding.  Approximately 300 log marks were registered in Queensbury alone.

The industry grew, so did the need to organize the procedure of guiding, separating, and sorting the logs to their appropriate mills. In 1850, a group of mill owners joined together to form the Hudson River Boom Association.  Their mission was to create “holding” and “sorting” booms to facilitate the process.  The main outcome of this venture became known as the “Big Boom,” which encompassed a 600-foot chain of logs that spanned the Hudson River three miles upstream from Glens Falls.

As lumber suitable for construction grew in scarcity, mills turned to the production of paper.  In 1905, Finch, Pruyn, and Co.  built a pulp mill just east of the bridge on the northern side of the river.  Making paper required resources such as large quantities of water and raw material, both of which were plentiful.

From the mid-nineteenth through the early twentieth century, Glens Falls’ prime location at the bend and falls of the Hudson River, enabled the town become a major commercial center. The community prospered and was known as one of the wealthiest in New York state of the time.  Today, some mills such as Finch and International Paper are still in the business of manufacturing paper.

When Seneca Ray Stoddard turned to photography as an additional source of income in 1867, Glens Falls was still recovering from the devastating fire of three years prior.  The efforts to rebuild, as well as other factors, spurred a massive expansion of the lumber industry in the area.  The Stoddard photographs in this exhibit document some of those logging activities and sites.