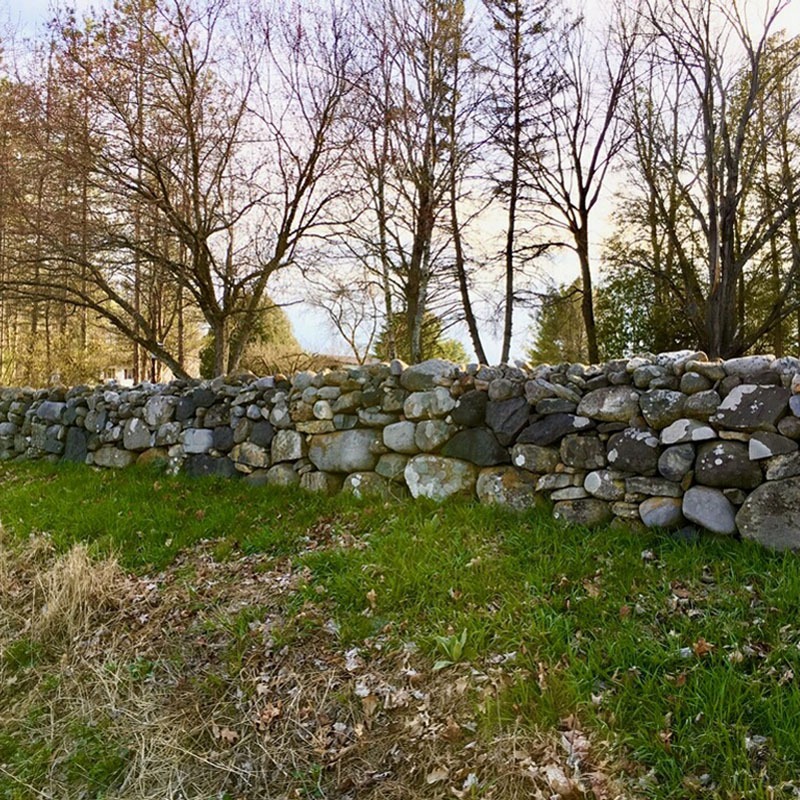 Many, many years ago I bought a book called Sermons in Stone – The Stone Walls of New England and New York, by Susan Allport.  In this Covid-19 world of quarantine, isolation, and a work-from-home mandate, I went looking through my bookcase for inspiration and pulled it from the shelf.  While it seems that my interest in historic stone walls is nothing new, I never would have thought that this very title would have more meaning than I could have ever imagined.

Dotted throughout Queensbury, are the remnants of stone walls that once mapped out the town’s rich, agricultural past.  Perhaps the best place to start looking at stone walls would be the area once known as Sanford’s Ridge, known today as Chestnut Ridge.  At the first sharp turn heading north from Quaker Rd., you encounter a stone house on the right side and a brick and clapboard house circa 1790-1810 flanked by a stone wall on the left.  It was here that I decided to start my research and came upon the story of the Reverend George S. Brown.

Born in 1801 in Newport, Rhode Island, George Brown was a free African-American.  His father Amos was an Elder in the Baptist Church.  His mother Hannah, was the daughter of George and Delight Smith.  George Smith had been a slave who was freed by his owner in 1755 in Connecticut.  Young George Brown grew up in a religious household and was profoundly moved by a particular preacher while at a camp meeting at age 14.  His spiritual upbringing would continue until he moved on from the home of his parents at the age of 20.

The transition to independence was not a smooth one for George.  By his own accounts, the departure from his family left him vulnerable to many temptations and he found himself led astray.  For the next six years, from 1821 to 1827, he supported himself as a wandering minstrel and possibly a mason.  As he traveled from town to town, he entertained and “caroused” and drank.  He landed in Kingsbury, NY by 1825, where he built the stone Beach Schoolhouse on Vaughn Rd. with the assistance of expert stone cutter Abiel West.  A couple of years later he made the decision he had had enough and accepted a two-week job at the farm of Samuel Cole in Kingsbury to “dry out”.  Two weeks turned into two years, during which time his life took an about-turn.  The community had a positive effect on his wellbeing and he returned to his roots.  Brown wrote in his journal that he felt called by God to spread the gospel and he began to preach at the Beach Schoolhouse; the very schoolhouse he had built with his own hands.

In 1829, he moved to the farm of Gould Sanford at Sanford’s Ridge.  He came under the influence of William Ryder, an exhorter in the Methodist Episcopal Church and converted.  Soon, Brown began preaching at the Methodist Church established by Gould’s uncle, David Sanford. His passionate sermons earned him a following in the area and the power of his convictions packed the church.  He joined the Troy Methodist Conference and became a licensed preacher in 1833.  The Reverend George S. Brown made history as the first African-American preacher in the Troy Annual Conference of the United Methodist Church.

While his reputation grew as a preacher, so did his reputation as a capable stone mason.  Though it is unclear exactly where or how he learned the trade, he must have had some innate talent for the craft and furthered his skills with practice.  Brown paid his way by taking jobs building stone walls for Queensbury landowners.  In his journal, he noted he was paid $1 per rod of stone plus room and board.  [A rod equals 16 ½’ long.]  According to local sources, Reverend Brown built the stone building on Ridge Rd. as well as the stone walls in the vicinity.  Other stone walls purported to have been constructed by him include the walls on both sides of Chestnut Ridge Rd. at the Nehemiah Wing house, and the walls in front of the George Brayton farm on the west side of Ridge Rd. north of the Route 149 junction.

As noted by former Warren County Historical Society president William Richards, Brown had a distinctive style of laying stones without the use of mortar.  The method he employed was called dry-stacking.  These walls are essentially rubble walls where two vertical outer layers of stones sandwich an inner layer of smaller stones.  The bottom is wider with the two vertical sides leaning into each other.  Larger boulder size stones often form the base and layers of smaller stones are added with the joints regularly staggered with a larger stone the joins the wall front to back called a jumper.  The core is filled with smaller cobble and in between the joints irregular stones are packed as chinking.  It is this technique which produces friction and gives the wall strength and stability.  The walls that still stand today are a testament to Brown’s mastery of this art form.

While it seems that most citizens were tolerant if not openly supportive of Brown’s ministry and his presence in town, there were a few individuals who were determined to see him leave.  He eventually left Queensbury and settled in Wolcott, VT where he continued to preach.  He is credited with organizing a white congregation and overseeing the construction of a church there in 1855-56.  It would prove to be the only white United Methodist Church to be formed by an African-American in the United States at that time.

In 1855, the daughter of Abraham Wing III was married to Dwight Merriman.  As a wedding gift, Abraham bought his daughter and son-in-law a 640 acre farm in Jackson, MI.  Soon after, Abraham personally recommended that Reverend Brown build the walls around the farm, so impressed he was with his work.  It took five years of letters from Wing and negotiations with Merriman before Brown agreed to the terms.  He accepted the job on the conditions that he would be paid $1.50 per day plus room and board, no work on rainy days, and transportation one-way to MI be provided.  In addition, he was able to bring a hand-picked team of local men to assist him who would also be compensated handsomely.   The wall took two years to build and was completed in 1866.  In 1869, the wall and the quality of workmanship that went into its construction were recognized by the Michigan State Agricultural Society for its “artistic and engineering” design.   The property was handed down to Mary Wing Merriman’s only surviving child, Ella.  Today, it is the Ella Sharp House, which is on the National Register of Historic Places.

Rev. Brown returned to Warren County, and died in 1886.  His final resting place is in the Quaker Cemetery at the corner of Cronin and Ridge Rds.   His legacy is not simply a headstone that bears his name, but the timeless stone landmarks that endure to this day and the remarkable story of man who faced many challenges, defied the odds, and made us believers.

Note:  Since this blog doesn’t address the many other anonymous stone walls in Queensbury and neighboring communities, a second installment of this blog is in the works.  It will discuss stone walls in greater detail and will present as more of a “field guide” for anyone wanting to learn more and go in search of them.