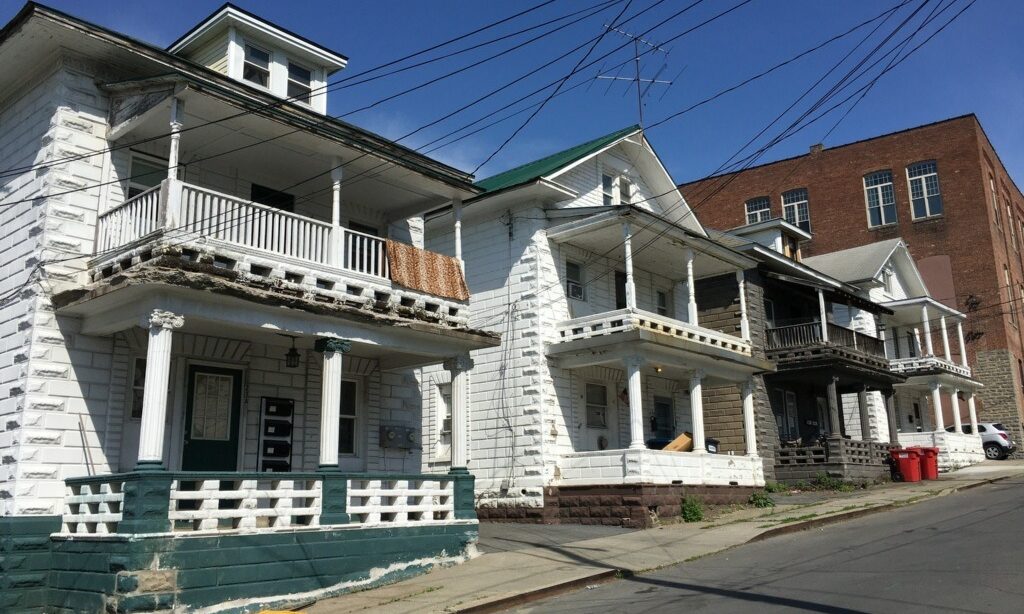 “Architecture is the biggest unwritten document of history.” — Daniel Libeskind

It doesn’t take much effort to love architecture when you consider it to be beautiful. It makes both the motivation to learn more about a building’s history, as well as the desire to save it should it be neglected, much easier. But what if the architecture isn’t so flashy? Do you still care? I wonder about those things, which leads me to ask… are some materials or designs inherently more pleasing or exceptional? What is lost if a building disappears? Ultimately, what deserves to be preserved?

In an older and more industrial section of Glens Falls, several unassuming dwellings line a street that is easily overlooked. It is a somewhat narrow passage that slopes from Warren Street to the Feeder Canal and although the series of homes that occupy both sides of it show a few promising hints of neoclassic design, they are modest when compared to others around the city. Surprisingly however, this otherwise unremarkable block holds some secrets to a noteworthy past. In fact, it was declared an Historic District and placed on the National Historic Register in 1984.

Lime St. first appears on local maps around the mid-19th century, making it one of the oldest established roads in the city. Its name comes from the many quarries in the vicinity. Not only that, but it served as a vital connection between those quarries and the Feeder Canal. There, boats would be loaded with material to be carried to larger markets in the south. Lime St. was one of the first major throughfares in town as a result. Today, the street is called Fredella Avenue, and its significance is no longer tied to the efficient transport of goods but rather the buildings that sprang up along it.

The turn of the 20th century was a period of American history that saw great waves of immigrants stepping upon our shores in the hopes of a better future. In Glens Falls, three ethnic groups were most predominant in terms of the numbers of new arrivals: Irish, Italian, and French-Canadian. Lumber, lime, and textiles were at the center of commerce at that time and provided plentiful opportunities for employment. The Italians brought with them masonry and construction skills. Their knowledge of stonework made them ideal for jobs quarrying limestone or in the production of cement. In 1901, one of those newcomers was a man by the name of Joseph J. Fredella.

A native of Sagata di Puglia, in the southern Italian province of Foggia, Joseph was born in 1876. At the age of 25, he boarded a ship bound for the United States and never looked back. He spent the first couple of years in Saratoga and Saranac Lake, but by 1903 he had settled in Glens Falls. He secured a job as a contractor and began building not only a career, but quite literally, the city around him.

Joseph had trained in Italy and was an experienced and gifted mason. His first few years in business demonstrated his competence working with brick and concrete, eventually landing him the job of constructing the Fort Edward District #9 School in 1911. Around this time, he also acquired his own limestone quarry at Upper Platt and Haskell St. This gave him control over his own supply of raw materials.

In 1912, he took full advantage of his expertise and resources to build his family a home on Mohican St. Using an unusual but accessible material, he built the house completely out of concrete except for the wooden rafters. It was the first building of its kind in the entire upstate New York region. It had 12 rooms and no lathing since the plaster could be applied directly to the cinder block walls. The piazza and roof were also concrete, as were the ornamental porch posts. The blocks themselves were produced on-site with stone from his quarry, the use of early block casting equipment, and over 30 cast-iron templates (possibly made locally to his specifications). There were two big advantages to using this method with this material; it was fireproof and a lot less expensive. A final coat of waterproof paint sealed the structure and helped to preserve it.

Having pioneered a more economical means of constructing houses, Fredella next turned his attention to alleviating the hardships faced by immigrants like himself. Specifically, he wanted to help remedy the lack of affordable housing. By the end of 1914, Fredella had erected four cement block “cottages” on the west side of Lime Street, with more planned. These were to be the homes for families new to this country, homes for the average worker. He even installed cement curbing and sidewalks as an upgrade to the properties and the street in general. Within the following year, four more buildings were added for a total of eight. To honor him, the residents of Lime Street petitioned the Common Council to change the name from Lime Street to Fredella Ave. Their request was obliged and Fredella Ave. as we know it today became official.

All eight houses on Fredella Ave. share very similar features. They were composed almost exclusively of blocks made from Portland cement and ash. It is evident that Fredella was versed in the vocabulary of classical architecture, as seen by his use of neoclassical elements. The two-tiered porches common to each structure are good examples. The support pillars are fluted Ionic columns topped with anthemion motif ornamentation. They were made of molded cement in four separate pieces and then stacked. The second story porch columns were Doric in style. The porch railings are solid beveled, rusticated cement and rock faced cement blocks, each with cast egg and dart handrails. The corners of the buildings display rock faced quoins and the door lintels under the gable peaks are inscribed with the date of construction, 1914.

In subsequent years, Fredella was awarded several high-profile contracts. These projects included business buildings, schools, highways, and public works: the foundation for the Sagamore Hotel (1920); the Hebrew Community Building (1925); the Boulevard between Glens Falls and Hudson Falls (1926), Feeder Canal foot bridge at Glen St. (1926), Big Cross School (1927), the St. James building on Warren St. (1927); the Ginsberg Block at the corner of Elm and Park (1929), and the bridge piers over the Boreas River in Warrensburg (1929).

Today, the homes on Fredella Ave. are still standing, although in a state of ongoing deterioration. They are in need of stabilization and restoration. Getting back to my initial thoughts on what exactly makes architecture appealing or of value, I realize that what’s important is not always what’s apparent. What is clear however, is what those cement walls meant to the people who called them home. To them, the buildings and the builder were worthy enough to persuade the local government for a formal change of address.