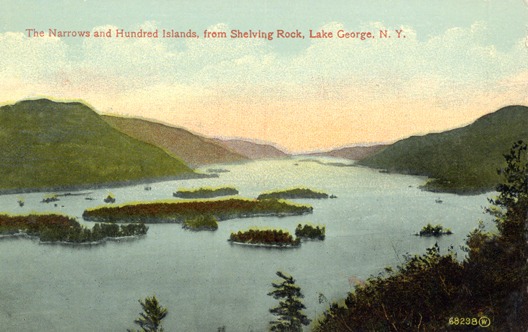 Born into a family of Glens Falls entrepreneurs, Frank Lapham’s life came with both responsibility and privilege.  His grandfather and uncle had established a grist mill along the Hudson River in South Glens Falls and as a young man, Frank also joined the business.  This did not mean, however, that he was given an office and a title.  Frank was an employee with physically demanding, and sometimes dangerous, duties.  Lessons learned on the job could not only be tough but potentially fatal, as Frank found out in December of 1885.

Within the mill was a large, 10’ deep hopper which served to contain grain until it was fed through a chute at the bottom onto a conveyer belt.  The belt then transported the grain to the top of the mill.  It was necessary for an operator to help shovel grain by climbing inside the hopper, after which, they would hoist themselves back out with a long pike pole.  On this particular day, however, the job was Frank’s, and he complied by getting into the hopper and began moving grain.  With the conveyor belt working, the level of the grain went down quickly.  Frank suddenly found himself sinking deeper into the hopper and realized he had forgotten the pole.  He tried frantically to scale its walls, but they proved to be too smooth.  Fearing that within minutes he would be caught within the revolving grain scoops and mangled, he yelled out.  The sound of running machinery drowned out his cries for assistance.  Fortunately, with not a moment to spare, another worker heard his pleas for help and pulled him to safety and saved his life.

Perhaps that experience shaped his future.  He appreciated the value of hard day’s work, but also the fruits of his labor.   It seemed that more than anything else, Frank enjoyed his time on Lake George, especially the Narrows.  He joined the Glen Club, an organization of like-minded gentlemen who reveled in the relaxation and camaraderie the Lake facilitated.  Days spent boating and fishing were the ultimate distractions. 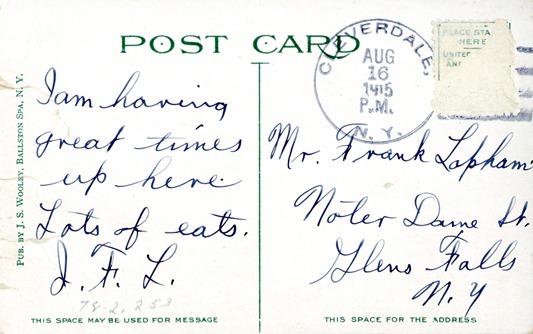 I have no doubt that when Frank received this postcard from his nephew, Jerome F. Lapham, he felt a little good-natured jealousy.  He knew where he wanted to be when the fish were biting!