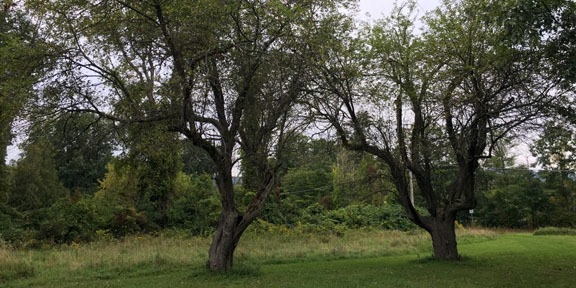 Fall in the North Country brings with it some much anticipated events…the vibrant colors of the changing leaves, the back-to-school routines, and of course, apple season.  New York has a rich history of apple production dating back to the 1600’s.  Traditions such as going picking as a family, cold cider and warm cider donuts on a chilly day, and apple pies at Thanksgiving are but just a few of the cultural associations that have been passed down over the years.   Like many communities around the state, it is a history that we are very much a part of.

From the time of its establishment in 1762, up until the mid-20th century, Queensbury’s greatest source of commerce was its natural resources.  For two centuries, agriculture was the driving force behind the town’s economy.  As early as the 1840’s, farms in Warren County averaged 115 acres.  Apple orchards were plentiful as even smaller size farms grew as many as 100 trees.   The completion of the Feeder Canal in 1832 enabled goods including apples, to be transported to larger markets in New York City and abroad.  Second only to potatoes, apples were an important crop for Warren County.  According to the 1860 federal census, 20,744 bushels of apples were produced in Queensbury alone.   By 1865, Queensbury had approximately 17,000 trees grown for fruit. Farms flourished in all directions, from the Luzerne Mountains on the western border, to the southern tip of Lake George, to the fields and hills of Washington County in the east.

In his book Earliest Memories, Richard C. Van Dusen recalled his childhood on a Queensbury farm located at the base of West Mountain.  He noted that on his family homestead, the lower orchard contained 30-40 trees, about half of which were of the Greening variety.  These apples kept well and a large portion of them would be packed into wooden barrels emblazoned with the Van Dusen name.  From here, the containers with their delicate cargo were destined for the shores of England.  Another variety on their farm was the Northern Spy, which would be used for both baking at home and sold locally.  While they were not nearly as delicious as the Northern Spy, Baldwins lasted through the winter and were grown as well.  In the upper orchard, a few Tolman Sweet and Russet trees rounded out the varieties.  Walking up the big hill towards Butler Pond and his school (#21) each morning, Richard  remembers passing Braydon’s Apple Orchard, occasionally stopping on the way to pick a Snow apple from one of Mrs. Braydon’s trees.

Along West Mountain Rd. south towards the border with Corinth, the road was lined with yet more orchards.   The McEchron family moved to Queensbury around 1831 and dubbed their newly built home the “Apple House”.  A large barn just southwest of the house was used to store the apples and the cider press.    Other families in the area who cultivated apples were the Clendons, Wilkies, Codners and Josslins.

Orchards dominated the hills and meadows elsewhere in Queensbury, too.  From Bay Rd., Ridge Rd., Chestnut Ridge and north towards Lake George, apple trees flourished.  Anson Staples, whose property was located where the Country House B&B is today, had 150 apple trees.  George Brayton’s farm was particularly impressive and produced large quantities for both local consumption as well as export.   In the area known as Harrisena, H. Russell Harris wrote of the multitude of varieties available at his grandfather Hubbell’s Farm, including Red Astrakan, Snow, and Yellow Transparent.  Names such as Gillflower, Pound Sweet, Hog-nosed Russet, and even Winter Banana were a part of the apple lexicon in Queensbury.  He fondly recalled the image of sliced apples being threaded onto a string and hung near the woodstove to dry.  And just as with Richard Van Dusen, Russell had memories of forays into the orchard at lunch time or while making his way home from school. 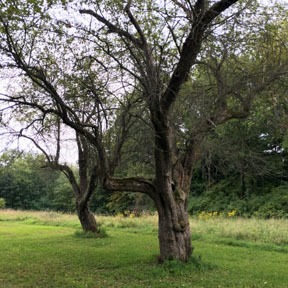 Apples were considered a staple and would have been found in everyone’s cellar.  A versatile ingredient, it appears in many forms, not simply pies.  Dehydrated apples were kept over winter and used in applesauce, jellies, pudding, and even a spread flavored with cinnamon.  Winter guests coming to call would be treated to a bowl of shiny apples as a sign of hospitality.  Of course, there was also cider.  Pressed from apple drops, this elixir had a multitude of possibilities as well.  It would be used in cooking, preserving, made into vinegar for pickling, and barreled for sale to local stores who rebottled it and sold it to their customers.  Sweet, fresh cider was a favorite of young and old alike, while hard cider was a grown-up only specialty.  Henry Harris (the uncle of H. Russell Harris) would apparently have stocked 25-30, fifty gallon casks in his cellar each fall.  Perhaps this is one of the magical potions that helped past residents get through the long winters.  There were even cider drinks made with sugar and eggs then mixed into a frothy concoction and a cider vinegar drink with sugar and ginger called “switchel”.

I wondered, with all the orchards in this area, could any trees still be found?  In my search, I spoke with Maureen Chase whose family homestead on Lake Sunnyside has existed for generations.  To my amazement, at least three, 100+ year old apple trees still live and produce apples on her property.  The variety is known as Strawberry, with a pale red-yellow skin and red veined, yellow flesh.  While a couple of other versions of Strawberry apples were found online, this particular one was not.  It is perhaps a purely local variety.  I was told these trees were standing when her grandmother lived there and that she recalled picking the fruit to make pies with.  She too, shared an account of apples being carefully packed (in ½ bushel velvet lined boxes) and shipped to England.  Imagine what an exciting delicacy it must have seemed to the foreign recipients of our own Queensbury Strawberry apples.  Although I was keen to sample one, it seems that they are a favorite of the deer population and they beat me to them.  Only one, lonely and half eaten example lay on the ground. 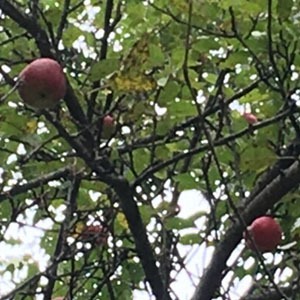 As I read multiple stories from back in the day, I kept track of the varieties grown locally.  I came across more than twenty-five.  These types today are known as “heritage” varieties.  Unlike many of the hybrid varieties found in our modern supermarkets, heritage varieties are open pollinated and were originally bred over a century ago, whereas hybrids are created out of heritage varieties based on their desirable traits.  And much like their heirloom tomato counterparts, they are usually not the most physically perfect of specimens.  They may be misshapen or not as appealing color-wise.  But in a world so obsessed with appearances and predictable results, there is still room for the antique, the unique and the poetically named.  In fact, thanks to the recent growth in popularity of hard ciders in New York, brewers are investing in those forgotten apples of long ago.  Albany’s Nine Pin Cider is bringing back the Golden Russet, the Kingston Black, and Ashmead’s Kernal for the qualities they lend to the cider making process.

For such a humble fruit, the apple has played quite a starring role in our town’s past.  It is a legacy worth appreciating and savoring.  Heritage varieties can still be found at area orchards.  Seek them out and experiment…and above all, enjoy!

The following is a partial list of varieties mentioned in relation to Queensbury, NY:

Baldwins – Developed in Massachusetts in 1740.  Plentiful juice.  Used for cooking and eating.