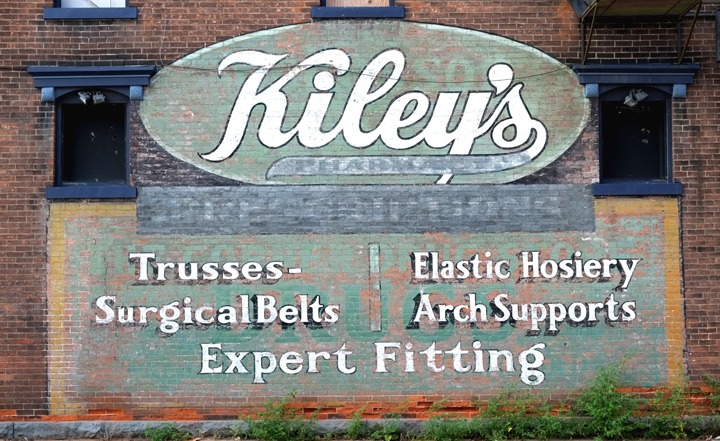 Recently, I posted an image on our Instagram account @chapmanmuseum of the Kiley’s sign on the northwest corner of Elm and South St.  Several people recognized and commented on it.  Judging from the likes and messages, this wall painting has a fan club.  The funny thing about signs is that they can transcend their role as advertisements and become iconic landmarks for the place in which they exist.

A couple of years back, the Chapman had an exhibit called the “Secret Life of Signs”.  It included all kinds of information about spotting the characteristics that make signs unique and what our local signage can tell us about our past.  But in an exhibit setting, just like in the movies, there are always scenes that get cut.    Maybe there wasn’t enough space, or the story was incomplete, or perhaps the story simply didn’t quite fit.  Well, I’d like to tell you about one of those scenes…

Without sign artists, there would be no colorful, painted signs on the sides of buildings; no vibrant, eye-catching neon; no bold graphics or fanciful lettering to prompt us to “need this” or “want that”.  For all the forwardness and attention-grabbing antics of this particular media, we actually know very little about the people behind them.  That knowledge takes some hunting and a bit of luck.

Rarely, are signs actually signed.  I’m not sure why, but I’m guessing that it has something to do with them being viewed as a commercial craft and not an art.  Their creators are viewed as tradesmen and not fine artists.  In my opinion, looking at them from this point of view does them both a disservice because it fails to recognize the vision and execution infused within each sign.

One of those unsung artisans was a man by the name of Gaspard Robillard.  Gaspard did not start off in the sign business.  In fact, he started his career on stage, as a vaudeville actor at age 15.  From there, his wiry 4’ 10 ½” tall, just over 100 lb. frame led him into a life as a circus performer.  He performed feats of daring as a stunt bicyclist with Sig Sautelle’s circus.  It is likely that while on tour, he would have been exposed to the art of the broadside. Broadsides were posters or flyers.  They were pasted to any available surface prior to the arrival of entertainers as a way to generate interest and ticket sales.  Eventually, Gaspard began to paint the circus cars they travelled in, likely drawing inspiration from the broadsides.

When he left the circus and settled down around 1905, he went to work at a sign shop in Saratoga.  It may seem unlikely, but his prior experience provided important strengths that could be applied to this new profession.  As a sign painter, he would be called on to paint large scale, elevated surfaces such as the sides of buildings.  The confidence he gained as a high wire unicyclist would prove very useful working while suspended at heights of several stories.  In addition, his eye for color, spatial relationships, proportions and perspective would have been more developed.

By 1910-1911, Robillard established a shop of his own in Glens Falls.  He would soon do a raised letter burnished gold sign for Bentley and Kathan Druggists on South St. (later to become Kiley’s Pharmacy).  According to the Glens Falls Daily Times, he also “completed the decorating of the Dreamland Theatre in Hudson Falls and a new set of scenery at the Bradley opera house in Fort Edward.”  In another article from 1913, he was noted for erecting 500 square feet of signage comprised of raised gold letters for the Yorke Shirt Company in Glens Falls.  From “the Great Gaspard” to “Robillard the Sign Man”, Gaspard Robillard earned a reputation for his unusual and memorable skill set.

About a decade or so after Robillard entered the sign scene in Glens Falls, another local man named Charles O. Perkins joined the industry.  He would complete a hand painted wall sign for Kathan and Groesbeck (also, later Kiley’s Pharmacy) advertising “The Corner Drugstore” sometime between the late 1920’s-1930’s.  This is the only sign I am aware of that had been signed, although this evidence has since been lost to time and the elements.  It is also possible that Perkins was responsible for a later incarnation of that sign, altering it to become the iconic “Kiley’s” sign we know today.

And finally, if you look carefully as you walk along the sidewalk going down Glen Street Hill, there is a very faint ghost sign on one of the limestone blocks.  Though barely legible now, it reads “Hoffman Signs”.  Towards the mid-20th century, Hamilton “Ham” Hoffman was making signs in the area.  While he would have been trained in painting, his favored sign medium and the technique he is most associated with is neon.  After working with other companies such as the West and Draxyl Sign Co. in the early 1940’s, Hoffman and partner Hum Hamlin took over the Glens Falls Neon Company in the early 1950’s.  Together they were informally known as “Ham” and “Hum”.  “Ham” and “Hum” went on to manufacture neon signs for numerous local businesses.  These businesses included Larry’s Men’s Shop, Leonard’s Pharmacy, and McBride’s Wallpaper in downtown Glens Falls; Galea’s Restaurant in Bolton Landin; and Blue Bird’s Supermarket, DelSignore’s Restaurant, and the Landmark Motor Lodge along the Saratoga Rd.

We probably will never know for sure who created most of the early signs still visible around Glens Falls.  That doesn’t mean however that we can’t start to get a sense of the artists who, quite literally, left their mark on our hometown.   All it takes is an observant eye, patience, and a willingness to follow the signs.