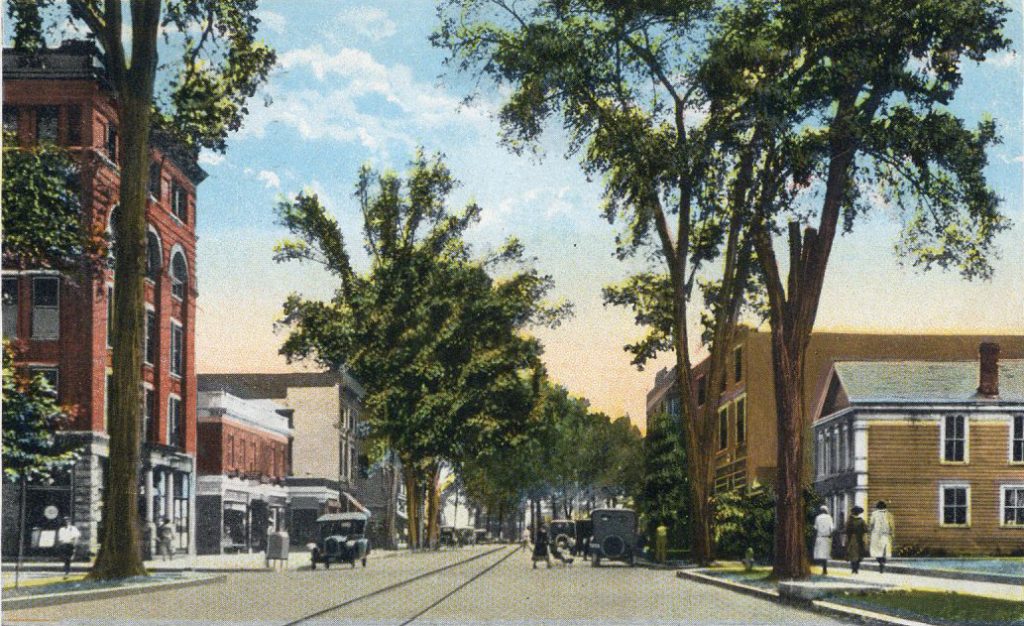 Today this country and this area are confronting a serious epidemic caused by a virus. Every day in the news media we are seeing stories of how people are acting or reacting to the suggestions or mandates proposed to prevent the spread of the disease.

Just over 100 years ago, this country and this area faced a similar dilemma, the flu outbreak of 1918 – 1919. It was devastating in its march across the country and in our area.

At the time, my grandfather, Dr. Robert A. Heenan, was the health officer for the village of Hudson Falls. Robert was the son if Irish immigrants. His mother, Mary Stringer, came to the U. S. in 1848, his father, John Heenan, in 1849 toward the end of the great potato famine in Ireland.

His father’s family came from Borris-In-Ossery in what is now County Laois. The group that was to emigrate consisted of John’s father and mother, an uncle and seven brothers and sisters, They left for Dublin on the first step of their journey, then to Liverpool, England, where they boarded the ship, the A. Z., for their voyage to America.

Tragedy struck on the journey as John’s father, his uncle and his three-year-old brother died on the trip and were buried at sea. The rest of the family arrived in New York on September 15, 1849. From there they traveled to their new home in Albany, NY, where although they had no relatives, perhaps there were friends from their area of Ireland.

Little is known about Robert’s early education, but he was graduated from Albany Medical College in the class of 1892.

Below is an article describing how he dealt with the flu outbreak in Hudson Falls.

“Dr. R. A. Heenan, health officer of the village of Hudson Falls, requests the hearty cooperation of the citizens generally in stamping out the epidemic which has secured such a grasp on the locality. The physician, as it were, is almost staggering under the heavy load. Coming from exemption headquarters Saturday afternoon, Dr. Heenan has been travelling night and day since that time catching hardly an hour of sleep. His duties as health officer together with his private practice has taxed his powers to the limit. The health officer has had brought to his attention reports that the disease is being circulated due to the carelessness of many of the citizens.

This report brought forth the statement yesterday from Dr. Heenan that visiting among neighbors must cease immediately and not resumed until the village is cleared of illnesses. In the event that this order, which the Post Star is authorized to make public, is not observed strictly, every resident having the epidemic will be quarantined as is the case in diphtheria and scarlet fever cases. The health officer does not wish to place additional burdens or inconveniences upon any one but insists that this order is complied with at once. Residents are also warned against entertaining visitors, either local or out of town persons for the reason that the disease may be scattered. Persons are asked to cooperate with the health department by warning persons coming to their homes not to enter in the event that any member of their household are suffering from Spanish influenza. Persons knowing of violations of the above order will be comforting a favor upon the village as a whole by notifying Dr. Heenan at once.

Despite the untiring efforts of the physicians of Hudson Falls who are cooperating with the health department in every way possible, the disease shows an increase in the past twenty-four hours. Every doctor in town is working night and day while nurses are not to be obtained at any price. Many of the citizens now afflicted with the disease are critically ill. It was reported last evening that more than 200 persons are ill and of that number, 50 of them may be termed serious as in a number of cases pneumonia has developed.”

The Troy Record reported that Dr. Heenan also ordered that “only near relatives may attend funerals there because of the Spanish influenza epidemic” and that “between 200 and 300 employees were absent from The Union Bag and Paper Corporation and nearly as many from The Standard Wall Paper Company.”

How did people respond?  Apparently not everyone complied, because on October 17th The Troy Record reported that Dr. Heenen and state troopers had to take enforcement action.

I wonder, “How would people react to these measures today?”