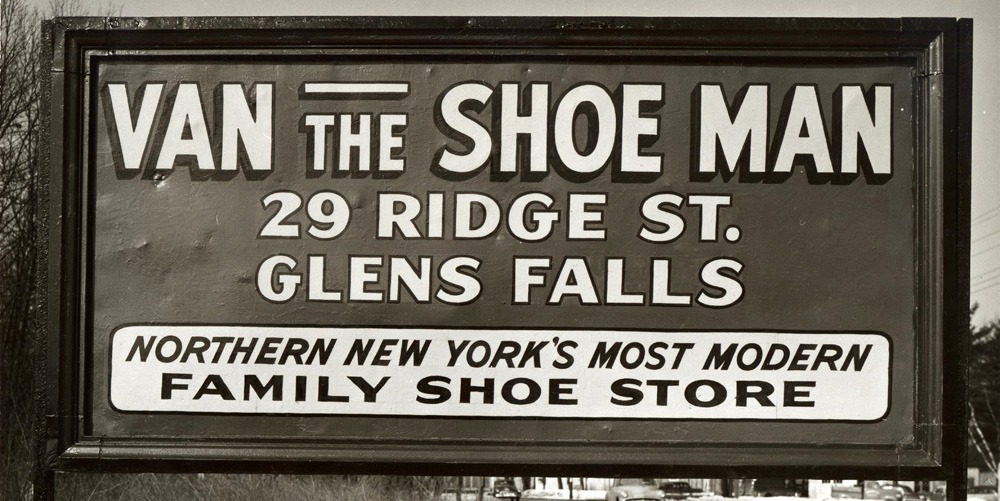 “…each time I tried a pair of shoes on I got to step on a fluoroscope machine and see my feet and toes inside of the shoes.”

– John F. Abess M.D. (on why he enjoyed shopping at Van the Shoe Man, from A Good Place to Live)

Shopping for shoes is not something children normally enjoy.  It is also not usually the type of activity many adults fondly remember about their childhood.   But, if you grew up in Glens Falls during the 20th century, chances are your experience may have been much different; and if you bought your shoes from Van the Shoe Man, your memories may even be nostalgic.

For over 90 years, this humble store served generations of local customers.  Countless feet walked in unhappy and left feeling comfortable and satisfied.  So, what was it exactly that made this place “stand out”?  Well, that’s exactly what I was interested in finding out!

In 1908, the very same year Glens Falls officially became a city, Jay Van Vranken bought out the A. J. Boyle Shoe Company at 13 Ridge St.  Mr. Van Vranken was 28 years old at the time.  With a winning sales model and a friendly demeanor, he was able to build his business.  By 1917, it was necessary to move to larger quarters and 11 ½ Ridge became the store’s home for the next 32 years.  During that period, life in Glens Falls changed.  The population grew.  Technology evolved.

Expanding on an 1896 Edison invention, a young military doctor named Jacob Love adapted Edison’s x-ray device for use during the First World War.  To meet the challenges of quickly fitting boots on new recruits without requiring them to remove what they were wearing, Love saw the potential in the “fluoroscope”, as it was known.  In 1919, he applied for a patent for his innovative reuse of the design.   Somehow though, another gentleman named Matthew Adrian acquired the same idea and applied for a patent in 1921.  Although the patent was filed two years after Love, Adrian was granted the patent in 1927.  His business went on to become the largest and most successful manufacturer of fluoroscopes in the United States.

The use of the fluoroscope took off and from the 1930’s to the 1950’s, it was a common sight in shoe stores like Van the Shoe Man.  People were intrigued with this novel contraption and would come in just to try out the machine that allowed you see your feet within the material confines of their shoes.  Store owners quickly saw the advertising potential and a new means of generating “foot traffic”.

Fluoroscopes fell out of favor however, by the early 1950’s.  The American Standards Association determined in 1946, that a safe level of radiation for humans was 2R (rontgens) per 5 seconds of exposure.  A fluoroscope image averaged 20 seconds.  Apparently, this was enough to dampen people’s enthusiasm.

But fortunately, Van the Shoe Man had another tool in his marketing arsenal.  That instrument took the form of an impish cartoon boy, his sweetheart, and his dog.  I’m speaking, of course, about Buster Brown.  The hugely popular character was the 1902 creation of Richard Outcault.   Buster Brown had been a mascot for the Brown Shoe Company since 1904, when a shrewd employee persuaded the company to purchase the rights from Outcault to use the name.  The association proved to be a wise investment for the Brown Shoe Company as well as merchants like Jay Van Vranken.  With a progression from comics to radio, theater, TV, and more, Buster Brown was a highly recognized and popular figure in America.

Buster Brown and Mary Jane style shoes proved to be a successful and enduring product line.  With his business booming, Van Vranken was awarded the Certificate of Distinction in the Brand Name Retailer of the Year, 1952.  In the year or so that followed, Van Vranken opened a children’s department on the second floor and nursey furniture and toys on the third.

Then, shortly after celebrating his 50th year in business in 1958, Jay Van Vranken passed away.  At the time, his store was recognized as the oldest continually running shoe store in Glens Falls.

Van the Shoe Man was purchased by Robert Rourke, who continued to operate the business at 29 Ridge until the building was an unfortunate victim of urban renewal in 1978.  Rourke then relocated the business to Warren St. where it was open until the late 1990’s.  Rourke passed away in 1999.  In 2003, the building was sold to Adirondack School Portraits and Sports Journal Portraits.

When talking about how the downtown has changed over the years, one place that always gets mentioned is Van the Shoe Man.  The conversations inevitably drift towards how getting ready for school or the holidays meant a trip to the shoe store with an X-ray machine, and how they bought their Buster Brown’s or Mary Jane’s from Mr. Van Vranken.  And as people reminisce, inevitably warm smiles spread across their faces.

A Good Place to Live: Recollections of Glens Falls and Queensbury in a Time of Great Change.  Chapman Historical Museum/Glens Falls-Queensbury Historical Association, 2015.